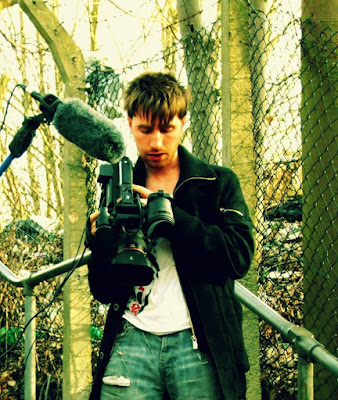 Fabrizio Federico, who are you?

We like the way your films seem to chew up all of cinema and spit it back out like the splatter paintings of a deranged Lifer. What's your intention with this style? Do you want to confuse and disorientate or is this just the way you see life?

It’s just my way, the underside of life is more interesting. I don’t care about formula or pleasing goody two shoes, I'm after Acapulco gold. It’s fun bringing all the out of control film fans out there together. Showing them how to lose themselves in exotic tribal cultures and lurid dark spirits.The films are spells to open people up to whatever they're searching for; sex, death, love, travel….. etc.

Tell us about The Straight Jacket Guerrilla Film Festival.
It was the first year so I was very happy with all the international filmmakers who came out of the woods to support its cause. Basically, I wanted to show the most deranged films on the face of the planet and to encourage filmmakers to not bother using scripts or professional actors in order to make an interesting film. Pick a dangerous subject and run with it, see what magic you can capture.

How did you go about making the documentary Anarchy In The UK (2016) and how long did it take to make? You seem to have interviewed filmmakers and underground cinema freaks from across the whole country. Did you go on tour with your camera with the intention of making this film or did it happen by accident?

Yes, I loved every minute of making that film. It took a year of travelling by coach, train and car everywhere in the UK, talking to all these great filmmakers and cinema groups who I respect and have something pure and honest to say about the magic of cinema. I didn’t want to speak to any government funded cinema organizations, I’m sure you can guess why. The worst are the hipster dishwashers at the Experimental Film Society in Dublin and LUX in London. There’s a lot of hate out there for these limp dicks and they’ve earned every penny of it.


Anarchy was directed by Jett Hollywood. Why did you invent Jett Hollywood?
Most filmmakers are so timid and studious it really bores me, you can tell they only live through their cameras, a bit of mojo goes a long way. Why should rock stars have all the fun with alter-egos and characters? Jett was inspired by Ziggy Stardust. He’s a filmmaker from Mars, he’s got a big cock, and he seduces virgins. He’s also on a death trip to make cinema raw again.

What are the differences between Fabrizio and Jett?
Jett is a godhead, a figure to show people that cinema needs to loosen up and become more decadent again. Use your wildest fantasies. The Evolution Of The Earth Angel & Anarchy In The UK are precisely that. Look at all these people who are now crazy with desire and ambition to change the world. I'm a loner, I don’t need anyone and no one needs me. I'm extremely selfish when it comes to love because I have so much to give. It’s focus that I'm after, and I’ve found it with cinema and sin.

Why did Jett commit “cinema suicide”?
Jett died for cinema. He’s Jesus Christ on the cross. He’s now a martyr and a legend. Too bad he had to die in order for it to happen.

In what ways is Fabrizio also a creation? Is the Fabrizio we know from your films the same person you are outside of film?
I think the concept of being real has also turned into ‘’a character’’. Because I’ve been honest from the start I can do or say everything. After you’ve survived death at an early age, you’ve got no fear of anything. Let alone of something as trivial as looking mad. What you see on screen is me confronting my fantasies and my experiences and putting them together. Life is really a fantasy and a mirror. It can also be a landslide of shit or stardust, just get naked and find out. 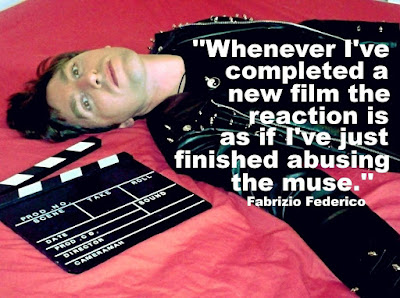 Which filmmakers or movements in cinema have made you who you are?
I'm more about the movements and their energy, especially Italian Neo-Realism , French New Wave, Dogme 95, No Wave and Poetic Realism. The Pink8 Manifesto is really the bastard son of all these energies put together. I guess I’m really the Walt Disney of underground cinema.

How do you go about editing your films?
By accident really, especially Black Biscuit cause I didn’t know what the hell I was doing so I took LSD and listened to exorcisms and Smile by the Beach Boys and just went into a visual trance. I wanted it to be messy. Pregnant was edited at night and I became a victim of the film’s subject. I wouldn’t leave the house for weeks. Going on the road afterwards and making Anarchy was a great cure to get away from social media and all those other home imprisonment trappings.

What are the main points of the Pink8 Manifesto?
To not study film, and to just do it. If you wanna make a punk film get your ass out there and get ready to steal in order to make it happen. Don’t beg or borrow, if you want something just take it. Im sure Aleister Crowley would say the same.

Why do you insist “Short films are NOT acceptable, it MUST be a feature”?
Because short films aren’t a challenge. Where’s the cathartic relief? Making a short film is the equivalent of jerking off, but making a feature film is similar to a long steamy love making session. There’s no comparison, it's either all or nothing.

Do you stick rigidly to all the Pink8 rules you've set yourself, for your own films, or are these more of a starting point to trigger action and creation, like the Dogme 95 manifesto?
Absolutely not, I hate rigid rules. Just keep it loose. I make my films like this anyway, so it's no stretch for me, but if someone wants to make a Pink8 film you can mix and match and even create your own shortcuts. Just take with you the spirit of the manifesto and that will be enough.

What happens next, Fabrizio Federico?
Whenever I’ve completed a new film the reaction is as if I’ve just finished abusing the muse. So she needs a baby rest for a bit, but in the mean time I plan on looking down from the mountain for a little while.